Statement against the VI Lithium Forum 2022: Water is Worth more Than Lithium 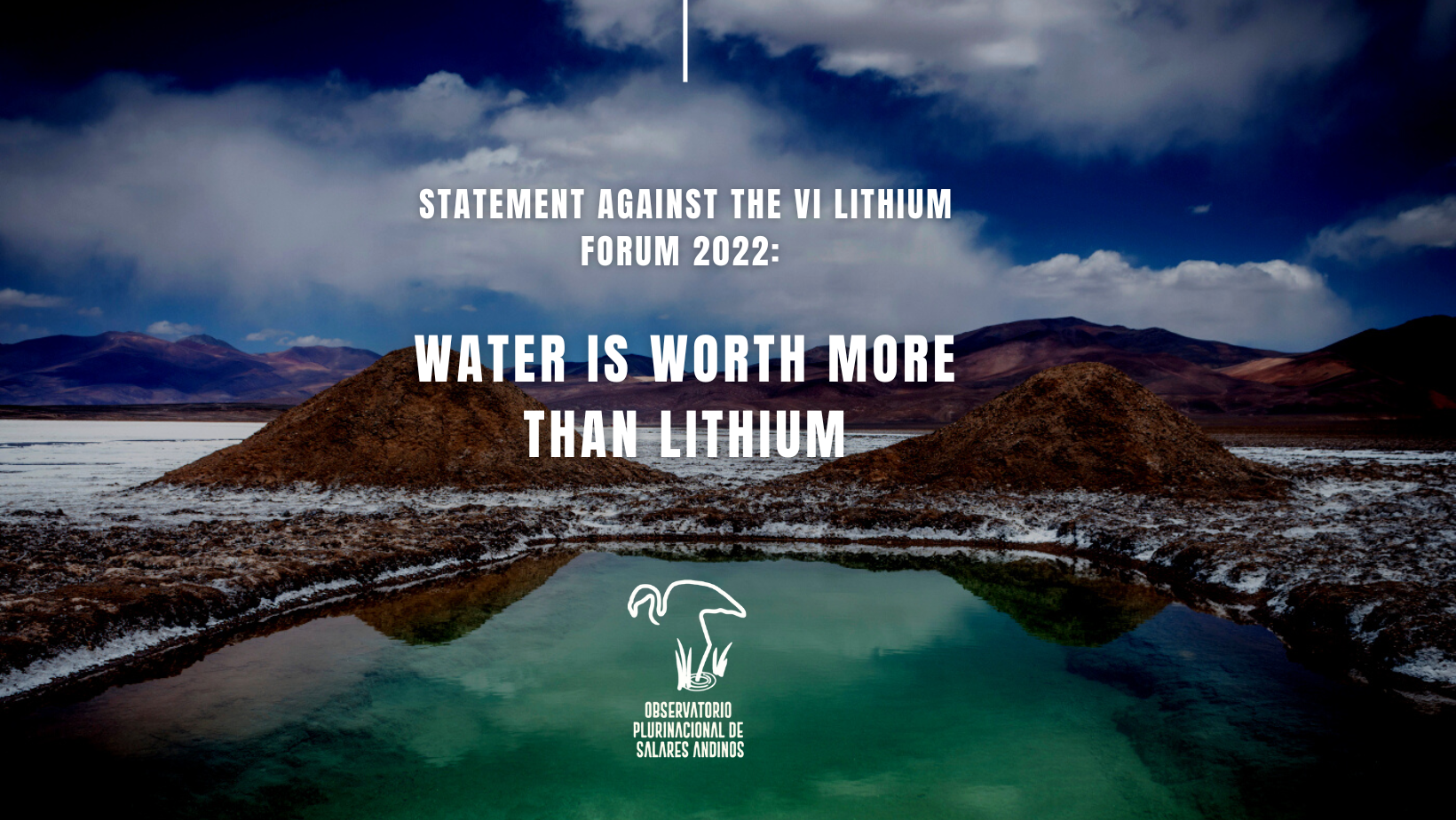 The organizations, indigenous community leaders and researchers participating in the II Plurinational Meeting for the Andean Salt Flats and Wetlands held on September 23 and 24 at the offices of the Heinrich Böll Foundation Cono Sur, are concerned about  the organization of the sixth version of the Lithium Forum on Wednesday, September 28 in Santiago, Chile, a meeting and exchange space between industry representatives and CEO of national and foreign companies to contribute to the commodification, exploitation and destruction of the already degraded Andean salt flats and wetlands in the name of lithium extraction.

Faced with the growing demand of the electromobility industry as one of the main climate change mitigation strategies defined by the global north, we have seen increasing and expanding lithium mining projects in contaminated and fragmented territories, without access to information or binding participation. We see the emergence of events conceived for the development of strategies that produce more Sacrifice Zones, enriching private and foreign corporations, with the explicit support of the Chilean Ministry of Mining and its authorities (such as the Assistant Secretary Willy Kracht).

Under questionable concepts such as responsible mining or the social value of mining, and the well-known promise of generating jobs – precarious and short-term – the lithium industry perpetuates practices that destroy Andean salt flats and wetlands, fragile ecosystems that are key to the lives of hundreds of communities living around them in Chile, Argentina and Bolivia.

Lithium extraction puts at risk the hydrological balance for a rich biodiversity that excedes national borders, and is a threat to peoples who are denied their right to water and territory, and who see their projects of life and productive subsistence activities such as agriculture and tourism endangered. Similarly, in view of serious scientific uncertainties, the precautionary principle is ignored as well as international treaties such as Convention 169 on indigenous peoples of the International Labor Organization (ILO), an instrument to which Chile subscribes.

We are concerned that mining and electromobility companies, with their associated organizations and lobbyists, continue to approach the exploitation of lithium with total opacity. Given the water crisis and the impacts of climate change that deeply affect territories such as the Puna de Atacama, the undersigned call the governments of Chile, Argentina and Bolivia to desist from attracting investment without first implementing policies for the real protection of these ecosystems, with strategies that ensure the binding participation of local communities and civil society, to mitigate the effects of the climate crisis not with a vision  on the markets but on the very territories of extraction.

We call on the government of President Gabriel Boric, as sponsor of the VI Lithium Forum 2022, to put into practice the commitments that his administration has adopted in terms of socio-environmental justice and access to information and participation, such as the recent signing of the Escazú Agreement. Likewise, we invite the international community to learn about this problem that is experienced in the south of the world, but which we know has impacts on a global scale. The protection of Andean salt flats and wetlands is everyone’s responsibility.

Water is worth more than lithium!