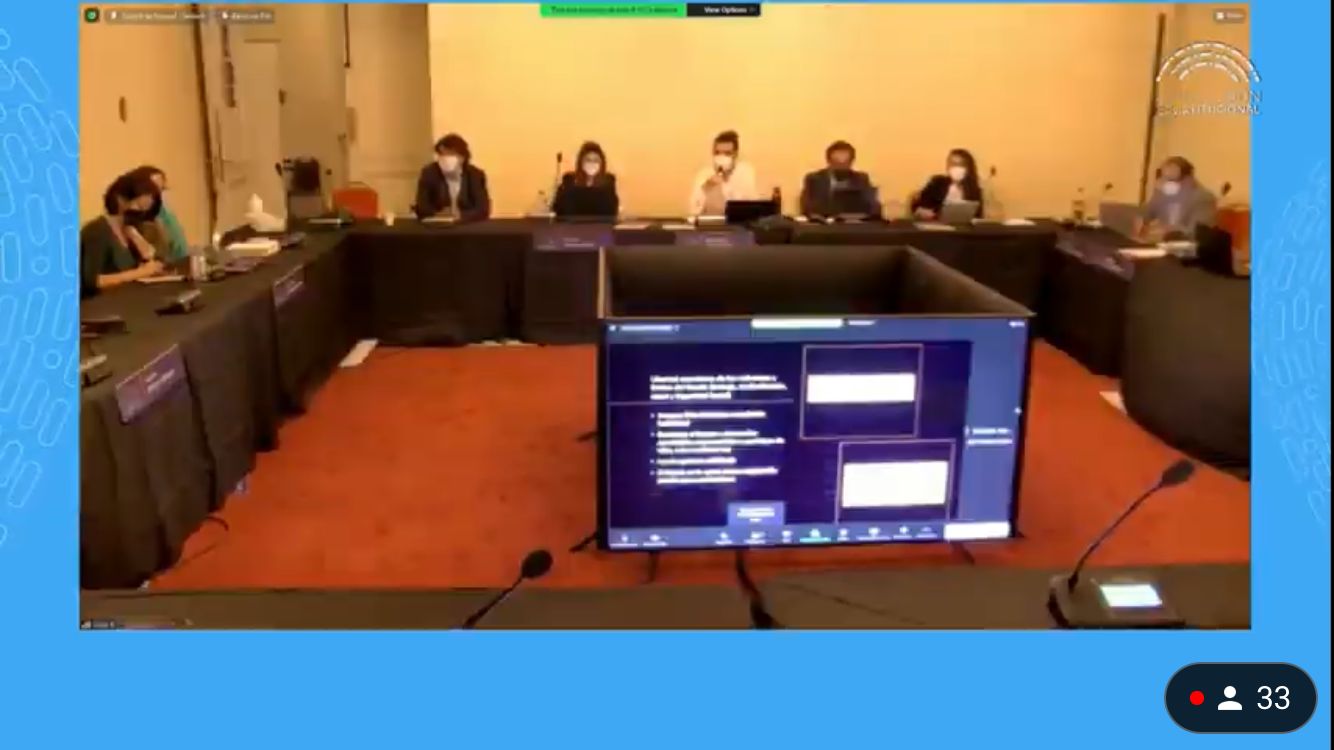 On Wednesday, November 3, members of the Plurinational Observatory of Andean Salt Flats (OPSAL) participated in a public hearing of the Commission on the Environment, Rights of Nature, Common Natural Goods and Economic Model of the constitutional convention, to highlight the need for the protection of life in Andean salt flats and wetlands, all of them ecosystems threatened by mining extractivism and climate change.

Representing OPSAL were Ramón Morales Balcázar, Master in International Studies with a Specialization in Sustainable Agricultural Development from the University of Paris XI and Ph.D. student in rural development from the Autonomous Metropolitan University, Mexico; and Rudencindo Espíndola Araya, topographer and farmer from the Atacameño Indigenous  Community of Toconao, and also a member of the Indigenous Association of Farmers of the Quebrada de Soncor.

In the hearing, they both argued- telematically, from San Pedro de Atacama, on the importance of protecting Andean salt flats and wetlands, “so that they are protected as complex ecosystems, and for that to happen it is first necessary to recognize the so-called Rights of Nature, because of its intrinsic value and not anymore following the dominant logics based on monetary compensation for the irreparable damage that companies do to nature”, explained Ramón Balcázar, who also highlighted the dangers that threaten these ecosystems, emphasizing the complexity of the various social-control mechanisms used by mining extractivism in order to expand in the area, «which is additionally threatened by the new lithium bidding process, promoted by the government,» he added.

In addition, he pointed out that “it is essential to consider a transition towards a post-extractivist development model, especially taking into account the context of the climate crisis that we are currently going through, and that particularly affects the territories of the new frontier of green extractivism, that is, the minerals demanded by the Global North for a market-controlled energy transition», said Ramón.

Rudecindo Espíndola, for his part, spoke about the community water management system that allows the persistence of Lickanantay agriculture, the serious impacts of floods associated with climate change, and the deep divisions that are generated by mining companies within indigenous peoples.

«In this commission, we were able to speak for OPSAL, and I -as Lickanantay, regarding the issue of lithium, the territorial water issue and to show (the commission) the problem of extractivist mining in the territory and present the work that we have been doing at OPSAL» Espíndola indicated regarding his participation.

“My impression is that it is necessary to communicate more of these issues into the (Constitutional) Convention and the different commissions that have been generated in the constituent work. (…) I have presented myself several times before in Congress and in its Commission of Environment, but people still do not understand, or do not take the weight of the tremendous problem in San Pedro regarding the water issue. I saw that very deep questions were asked regarding this, but I think that this issue, which is gigantic, still needs to be well-understood. And although we only spoke for twenty minutes,  the invitation was open to continue presenting in this space and to take part in the other topics that the commissions have, and thus take the chance to explain the territorial issues of our territory”, he stressed.

This commission is chaired by environmentalists Camila Zárate and Juan José Martín, and it also congregates Constanza San Juan, from the Guasco Alto Water Assembly, and Isabel Godoy, a reserved seat for the Colla people, whose territories are also threatened by lithium mining. This commission addresses fifteen topics, including the human and nature’s right to water, the rights of nature and non-human life, the environment, biodiversity, food sovereignty, principles of bioethics, and common natural goods.

At the end of the participation, the Plurinational Initiative for the Valorisation and Protection of Andean Salt Flats and Wetlands was presented. On this OPSAL is currently working in collaboration with territorial organizations of the Loa, Salar de Atacama, Salar de Maricunga, Huaso, Aconcagua, Maipo and Teno basins, and through participatory methodologies, they will generate an-input that will be delivered to the Convention so that the new constitution allows a legal framework that ensures the effective protection of these ecosystems, and a bill to be delivered in Congress.»

Here you can read the original article in (Spanish)

Here you can access the session Recording, which includes a presentation from CPA (Spanish):